The History of the Cadillac

Since its inception in 1902, Cadillac has become as synonymous with American cars as its competitive colleagues at Ford. Throughout its history, Cadillac broke new ground, set design and manufacturing trends and continues to impact the entire motor industry both domestically and abroad.

The Founding of Cadillac 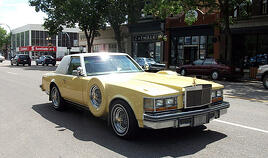 Henry Leland, developer of the more powerful Leland engine in 1901, founded Cadillac in 1902 after purchasing the equipment and factory of a failed motor company, previously known as first the Detroit Automobile Company and then The Henry Ford Company. Leland acquired the company from investors after Henry Ford quickly exited the company after a mere three months. The more powerful engine Leland had been unable to sell to Olds Motor Company was brought to the factory floor, and the Cadillac Company was born. It was named after the French explorer who had established the trading post that became the city of Detroit, where the newly purchased company called home. The trademarked emblem for the company is the Cadillac family crest; both name and emblem serve as symbols of hometown pride and loyalty.

Henry Leland believed wholeheartedly in the importance of interchangeable parts and tooling accuracy in his company’s manufacturing practices. Cadillac is the only company to win two Dewar trophies, an award given out yearly to the company responsible for the most significant manufacturing or design advancements in the automotive industry. The first Dewar Trophy was awarded in 1908 for Cadillac’s standardized automobile parts, which made Leland’s Cadillac the first American car company to win the award. Cadillac made history again when it won a second Dewar Trophy for its electrical innovations. Those electrical advancements broke new ground and continue to impact modern automobile electrical systems.

After being purchased by automotive mogul William Crapo Durant, and Henry Leland’s eventual exit in 1917, Cadillac continued to move forward with increasing success, both in terms of groundbreaking ideas within the industry and commercially among consumers. During the 1920’s, Cadillac stood out among its leading competitors due to its decision to offer buyers an expansive choice of color combinations, over 500 from which to choose. While most of the country’s companies were struggling through the Great Depression of the 1930’s, Cadillac remained alive thanks to its creation of the industry’s first 16 cylinder V type engine and then the midlevel 12 cylinder option.

The early history of Cadillac display’s the company’s firm foundation of innovative thinking, both in design and manufacturing. Cadillac was built from the remains of a fallen company on that innovation, and remains an industry leader in new and exciting ideas. From being the first to use the classic tailfin in a vehicle design to unveiling the first hybrid SUV, Cadillac has a long and ongoing history of invention.

What are the Benefits of Buying a Used Car from a Dealer?