Meet 8 Generations of the Chevy Malibu 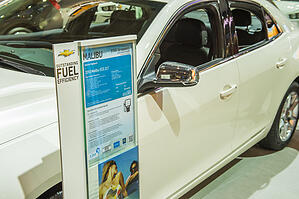 After being off of the market for over a decade, the Chevrolet Malibu reemerged in 1997 as a front wheel drive sedan. The Chevrolet Malibu has changed a lot across its eight generations of models, slowly transitioning from a high-end off shoot of the Chevelle in 1964 to one of the highest ranking midsized sedans among American consumers today.

The first generation of the Chevrolet Malibu was created as a more luxurious “top line” subseries of the Chevrolet Chevelle in 1964, and has become visually synonymous with the era in which it was made. The interior and exterior styling and finishing were designed to give drivers and passengers a more plush and high-end experience than the mid-range Chevelle. The 1964, the Malibu SS was made available as a two door convertible or hardtop sport coupe. Upgraded features that set the Malibu apart from its predecessor were the wheel covers, central console, comfortable bucket seats, enhanced steering wheel design and specialized engine gauges.

Chevrolet restyled the 1968 second generation Malibus, and its companion car the Chevelle, incorporating the new rounded gauge design that would be part of the brand new Cameros, released in 1969. Another new edition to the second generation of the Malibu was the launch of the Concours Malibu line, which included more luxurious models of the coupe, four door, and station wagon models. The importance of the Malibu Concours launch was that it, once and for all, gave the Malibu its independence from the Chevelle. In 1969, more slight changes to the headrests, rear deck taillights and grille design were incorporated.

The big news for the third generation of Chevrolet Malibu sedans was the introduction of the upgraded Laguna body option, and the increased body length and width sizes that were added to comply with updated federal crash safety regulations. The Laguna style replaced the previously discontinued Malibu SS and its European style was briefly the most popular midsized sedan in the North American market. In 1974, the Laguna trim was replaced by the Malibu Classic and the Laguna became its own model class.

Chevrolet said goodbye to the Chevelle in 1977, making the fourth generation of Malibu the company’s consolidated midsized sedan de jour. This new generation of Malibu was smaller, a downsized version of the model’s previously large and luxurious styling. A police car edition was released, highlighting the comfort and practicality that the Malibu had begun to represent.

Chevrolet stopped releasing under the Malibu nameplate from 1984 until 1997, when the new front wheel drive version of the Malibu sedan was brought to the global market. The “N-body” Malibus filled a gap in the late 90’s car market for reliable and comfortable family sedans. The revitalized Malibu was so well received that in 1997, much to the chagrin of some car enthusiasts, the pragmatic sedan was named Car of the Year by Motor Trend. In 2004 and 2005, the fifth generation Malibu was re-released exclusively for fleet order and rental car companies as the Chevrolet Classic.

Every generation of Malibu after the initial run that ended in 1983 seems to move further from its origins as a luxury coupe and sedan. In 2004, the sixth generation of Chevrolet Malibus were presented on its newly adopted Epsilon platform, in a four door sedan and five door hatchback designs. Even though the sex appeal of the Malibu Classic was nothing compared to the 1964 top line model, it was a solid family sedan and hatchback option that had the engine specs die-hard Chevrolet fans expected. The sixth generation was also when Chevrolet converted to a global design standard, which allowed for increased development of technology and the reintroduction of the Malibu SS.

Chevrolet heard and responded to reviews that said the sixth generation of Malibu offerings were a bore by creating a sleek and modernized seventh generation release in 2008. The rounded, longer, slimmer body design, redesigned interior finishing and updated safety features meant that, when the Malibu was named North American Car of the Year in 2008, there was less of a confusedly negative backlash from critics.

The most recent generation of Chevrolet Malibu incorporates all of the safety, comfort and performance features that have been developing for the mid-range sedan since its reintroduction in 1997. The initial reception of the made-over 2013 Malibu was not as good as Chevrolet anticipated, prompting a revamp of the generation’s design in 2014. The design tweaks included improved powertrain, interior room and lighting designs.

From luxury convertible to spacious family sedan, the Chevrolet Malibu has undergone a huge transformation since it first appeared on the market fifty years ago in 1964.

What are the Benefits of Buying a Used Car from a Dealer?